Our Violin, Viola, and Cello staff have extensive performance experiences and/or pedagogy degrees. Emphasis is placed on fundamentals and developing tone, technique and musicality as well as standard repertoire. We offer performance opportunities in the form of at least 2 recitals per year, string ensembles, and optional participation in worship band and other ensembles.

Our standard instructors use the Suzuki method books alongside other curriculum. We accept students from age 6 and up, though exceptions are made on a case by case basis.

Suzanne Inwood (violin, viola)
A USC music school graduate, Suzanne has taught for over 30 years. Accomplishments include performing in the Indiana University Symphony, South Bend Symphony, USC Symphony, among others and teaching at the South Bend Community Schools Summer Clinic, the Idylwild Summer Music School, the Irvine Conservatory of Music, the USC Community School of Performing Arts. She is a creative teacher committed to excellence, providing good fundamentals for the beginner and coaching advanced students as they prepare for auditions, performances, and contests.  Suzanne is also offering a 10% discount on lessons for senior adults ages 70+. 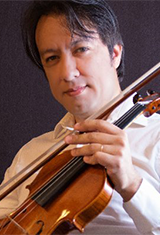 Marcelo Soares (violin, viola)
Marcelo Soares is a classically trained violinist from Brazil who has more than twenty years of coaching and performance experience. During his extensive orchestral career, Marcelo served as the concertmaster of the Riberiao Symphony Orchestra, and appeared as a soloist with them on numerous occasions. Additionally, he was a member of the Sao Paulo Symphony Orchestra, and was a Titular First Section Violin under the direction of Marin Alsop. As an international soloist, Marcelo has performed works including Romance by Antonin Dvorak, Karl Goldmark’s Concerto for Violin, and Violin Concerto no. 1 by H. Wieniawsky. In January of 2020, he won first prize in the 6th edition of the Shenzhen, China music competition. Beyond his orchestral career, Marcelo enjoys private teaching, as well as coaching students for competition; in 2009, he was invited as a guest teacher at The University of Sao Paulo. He is dedicated to helping students prepare for their auditions and develop a fervent passion for music. Fluent in Portuguese.

Jared Storz (cello)
recently completed his Master’s Degree in Cello Performance at Azusa Pacific University after completing both a Bachelor’s Degree in Cello Performance and Humanities degree in 2018. Prior to his time at Azusa, Jared studied with Seattle Symphony cellist Walter Gray, and had the opportunity to participate in masterclasses with both principal Chicago Symphony cellist Stephen Balderston and renown cello soloist Joshua Roman. Jared studied under Dr. Marek Szpakiewicz DMA, Professor Christopher Russell, Ingrid Chun and Suli Xue of the Los Angeles Philharmonic, Karen Dryfus from USC, Glenn Dicterow, former New York Philharmonic concertmaster, and Dariusz Skoraczewski, the principal cellist for the Baltimore Symphony Orchestra. Jared had the opportunity to travel to Zhengzhou, China with a small group of six instrumentalists from the Azusa Pacific University Symphony and Professor Russell. While in Zhengzhou, Jared and his colleagues rehearsed and performed with the Yellow River Symphony Orchestra, performing Aaron Copland’s Our Town, Johannes Brahms’s Concerto for Violin and Cello in A minor, and Tchaikovsky’s Symphony No. 2 in C minor at the Henan Art Center. Additionally, while playing with the symphony, Jared had the opportunity to play for a televised choral competition that took place near Zhengzhou. Jared has additional performed as a cellist and choral ensemble member in both Hong Kong, Xian, and Beijing. In addition to his classical training, Jared has also had the privilege of working throughout Los Angeles as a performing and recording artist.   https://www.youtube.com/channel/UC1MPNIgP1MkAGa191CNeqbg?view_as=subscriber 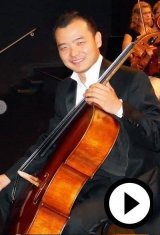 Yao Wang (cello)
was born in Xinjiang, China, and began cello study at the age of five with his father. After attending Shanghai Conservatory in China from 2004- 2005, he completed his Performer’s Certificate at La Sierra University in Riverside, received a full scholarship to the Thornton School of Music, University of Southern California, and received his Master Degree in music performance from Azusa Pacific University. In 2000 Yao was awarded 2nd Prize in the National Competition and top prize in the Central Conservatory String Competition in China. In 2002 he received a full scholarship to the Itzhak Perlman Music Program, and performed with Perlman in that year. Also in 2002, Yao was featured soloist in a performance of the Elgar Cello Concerto with Xinjiang Philharmonic. Yao won 1st Prize in the American String Teachers' Association competition in Redlands Los Angeles, and received a full scholarship to the International Cello Master Program Gregor Piatigorshy Seminar that year. In 2008, he became one of winners in Sigma Alpha Iota Competition. Yao served as principal cellist of the Corona Symphony Orchestra from 2008-2010 and continues to solo in the Los Angeles area. Fluent in Mandarin. 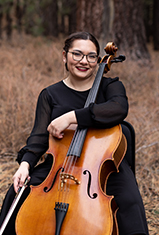 Sarah Howard (cello)
A cellist from Bakersfield, CA, Sarah has earned her Bachelor’s degree in Cello Performance, and is currently working on her Master’s Degree in Cello Performance from Azusa Pacific University. Sarah has studied under the instructions of Dr. Marek Szpakiewicz, Dr. Charles Tyler, and Dr. Dieter Wulfhorst. She also had the opportunity to participate in masterclasses with New York Philharmonic principal cellist Carter Brey, and Dr. Simona Barbu from the University of North Dakota. During her 14 years of studying and performing, she has been a part of a variety of ensembles including orchestral, chamber, and choral. She also has experience in solo performance, studio recording, and live theater production. In 2015, she toured with the Bakersfield Youth Symphony Orchestra to England and Scotland under the baton of Maxim Eshkenazy. She has been teaching privately since 2015, and coached cello students at the Summer Music Academy in the Bakersfield City School District in the summer of 2022. 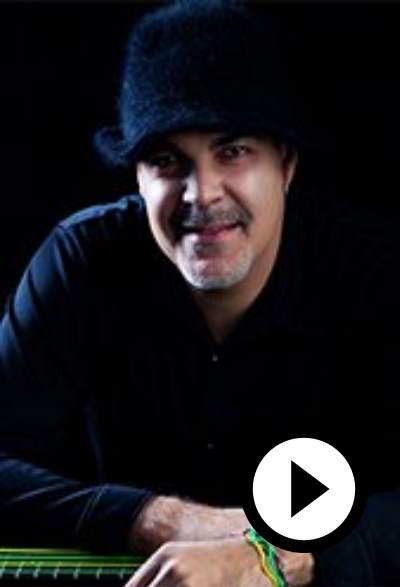 Leo Nobre (string bass, guitar)
Leo has his bachelors degree in music from the University of Miami. A native Brazilian, Leo attended the American School of Rio de Janeiro, studying acoustic nylon guitar and string bass. As a high schooler he played with various Brazilian artists before being accepted to the University of Miami School of Music where he studied music theory, piano, arranging, and composition. He is a jazz musician, performing on and recording with many artists like Herbie Hancock, Stevie Wonder, Dori Caymmi, Airto Moreira, Jill Scott, Sergio Mendes, Hubert Laws, Black Eyed Peas, Shakira and many others. Leo has been awarded two Latin Grammy awards for playing with Sergio Mendez.  Fluent in Spanish, Portuguese, and Italian.