Our trumpet, trombone, baritone (euphonium), tuba, French horn staff have extensive performance experiences and/or pedagogy degrees. Emphasis is placed on fundamentals and developing tone, technique and musicality as well as standard repertoire. We offer performance opportunities in the form of at least 2 recitals per year, and optional participation in jazz ensembles and other groups.

Our standard instructors use the Arban’s and Clarke method books alongside other curriculum. We accept students from age 7 and up, though exceptions are made on a case by case basis. 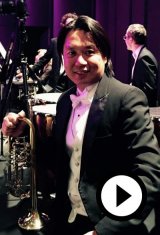 Dr. Caster J. Teoh (trumpet, brass)
Hails from Penang, Malaysia, Caster started playing the violin when he was 6 years old but switched to the trumpet in 1997. Caster was serving as principal trumpet in the Penang Symphony Orchestra from 2000-2002. In 2015, he was appointed Principal Trumpet with Dream Orchestra of Los Angeles and has been performing with this wonderful ensemble since then. Since coming to the United States, Caster has appeared in numerous orchestras, including the American Youth Symphony, Orange County Symphony, Santa Monica Symphony, Quad City Symphony, Cedar Rapids Opera, West Coast Chamber Orchestra etc. While in college, he was one of the finalists in the Maia Quartet competition and was awarded outstanding Pi Kappa Lambda award in 2007. Caster has been performing with many professional ensembles, including the Malaysian Philharmonic Orchestra, Brazilian Symphony Orchestra, National Orchestra of Malaysia, Kumamoto International Orchestra, etc. under numerous conductors and artists, such as Kees Bakel, Michael Tilson Thomas, Kurt Mazur, Dame Kiri Te Kanawa, Kazuyoshi Akiyama, and many more. During the summers, he has performed in many countries, including Brazil, Italy, Japan, Korea, Belgium, Taiwan, Australia, Thailand, Canada, etc. A doctorate graduate from the USC Thornton School of Music, Caster was inducted as a member of the Phi Beta Kappa Honor Society in 2007 and 2013. While at school, he was also a Fulbright scholarship student and has been awarded 2013 outstanding Brass Chamber Music award. For the past summers, Caster has been performing in many world-class music festivals, including the International Winter Music Festival in Brazil, Alba music festival in Italy, etc. In 2014, he was invited to perform Bach’s Brandenburg Concerto No. 2 with West Coast Chamber Orchestra. His primary teachers include Andrew Balio, Boyde Hood, David Greenhoe, John Bourque and William Theis. Aside from being an orchestra musician, Caster has also served as Music Director/ Conductor of the Youth Symphony West Orchestra, Brass Coach at California Summer School for the Arts and Adjunct Professor of Brass at Grace Mission University. Caster is a much sought after teacher of trumpet. His students have won numerous music awards, admitted to credited universities, such as Michigan University, Eastman School of Music, University of California, Los Angeles, Cal state University at Northridge, etc. At the same time, Caster’s students also performed in music festivals, orchestras and competitions throughout the country, including the International Trumpet Guild competition, Colburn Youth Symphony and Jazz Orchestra, Pacific Youth Symphony, Idyllwild Music Academy, Colorado Youth Jazz Ensemble, etc. 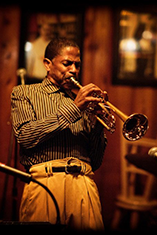 Nolan Shaheed (trumpet)
One of the world’s fastest men is also one of the best jazz trumpeters on Earth. Nolan Shaheed, is the world record-holder at 800 meters and the mile for people 50 and older. He also competes in triathlons and runs the 1,500 and 3,000 meter events. His lips are just as fast as his feet. He was musical director for Marvin Gaye and he’s played with Count Basie, Natalie Cole, Stevie Wonder, and Diana Ross, among others.